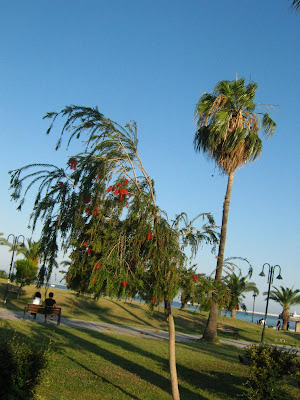 Today, after work, as I was sitting on the shores of the Mediterranean ("sitting on the shores of the Mediterranean" - I love my life, seriously), I noticed some palm trees near the apartment block that I live in, and I thought about the first time I ever saw a palm tree in real life (traveling down the coast of California 10 years ago, for the record). And I remembered how ecstatic I was (Jeremy, vouch for me here, okay?), how I got so excited - "THESE ARE REAL ACTUAL LIVING PALM TREES I'M SEEING, IN PERSON, OMG!!!", and now I barely notice them, having lived the past almost-3 months constantly surrounded by the presence of palms.

I thought about how desensitized one can become , when constantly being shown newer, more extreme, more wonderful, exotic places.

When I was in Iraq ("When I was in Iraq" - sorry, gotta say it again, I LOVE MY LIFE, seriously), I had a conversation with Joe, the room-mate of my friend Emily whom I was staying with, about this sort of thing. He himself was currently teaching in Iraq, previously living in Yemen, before that traveling through such varied places as Afghanistan, Azjerbaijan, and Algeria (and that's just the first letter of the alphabet). He was saying that after having these sorts of amazing adventures, (over a decade on the road total, traveling and working in the most off-the-beaten-path places one can think of), he couldn't go back to the 'normal' world, that is to say, go back to living in Canada and having weekend BBQ's with the neighbours, discussing the latest sports event or what public blunder Stephen Harper had made most recently. It was next to impossible for him to find any enjoyment in the, for lack of a better word, mundane, and really, after seeing the hills of Iran, the Sahara desert at dawn... or living with the Iban tribe of central Borneo, who can blame him?

I sometimes I worry I am becoming this way, that I wont ever again be able to work a 9-5 job in a safe and comfortable (read: boring) place (working this job in Mersin has been difficult enough), which scares me a little.

Then again, as I noticed the palm trees today, I had this mental dialogue (that I am now writing here), with myself, and I thought about all I had seen on this trip...and I giggled a bit because I really WAS giddy about it, and i feel like, as long as im giddy im not jaded, so that must be a good thing. right?

Anyways, if i have to work a real job and live somewhere more permanently, if i can do it in a city like Istanbul for awhile, maybe that will be a smoother transition from "traveling gypsy freak who has the tan lines of an illiterate olive picker" to "normal respectable pasty Canadian working citizen". Because if i came back to Canada right now, especially just in time for Fall (read: Winter), id be ripe to suffer from some intense reverse- culture shock i think.

Sort of like bubbling up to the surface after an intense dive. Come home too hastily from traveling the Middle East and you'll get the reality bends

However, I also thought today how much I miss my family and CAT, oh god Truman i miss you and your whiskers waking me up so much, so i know eventually that missing will pull me back to Canada. But for now, I am really happy and still riding the giddy-wave that 3 months spent in the most mystical places on earth will cause.

It's like ive been possessed by the Djinn of adventure and he wont let go.

Things I have learned thus far from my time working in Mersin: 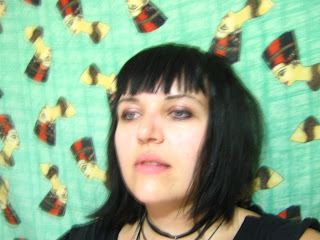 Well, ive been here in Mersin almost 3 weeks,
and those worn out vagabond shoes are really really realllllly longing to stray.

i miss overnight trains and cramped buses, greasy hair and unwashed faces, seeing the landscape change from desert to mountain to plateau to sea and back to desert again.

i miss coffee and potato chip breakfasts eaten while standing, and passing out in my shoes after staying up all night.

i miss the banks of the Nile and the rocks of Mt. Sinai, the sand dunes of Jordan and the hazy hills of Damascus.

i miss the chaos of travel.
No comments: 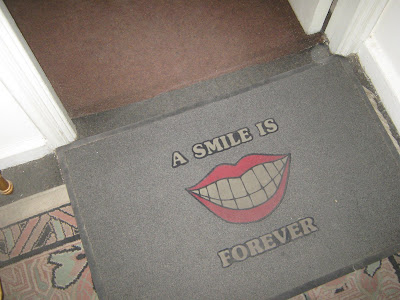 My face feels like its going to explode. hurray.

this whole absessed tooth fiasco is a reminder to me that one can simply not plan for anything, or prevent anything from happening.

i specifically recall visiting the dentist back in Calgary before i left, so that i would be all set and not have to worry about anything like this happening...and here i am, in agony, on antibiotics and scheduled to have a root canal procedure (oh joy, fuckkkk), in Turkey.

i sometimes just feel like throwing my hands in the sky, and saying "SERIOUSLY?!!" ARE YOU KIDDING ME GOD?" but i feel like he/she's probably seen worse, so i stay silent.

i tried meditating while sitting on my bed earlier, listening to the crash of the waves outside my window and breathing until i became a wave and felt no pain.

is that the lesson here? to enlighten me to becoming some meditative Buddhist? is everything zen? is there a master plan here? 'Cause i aint seeing one, at the moment, and would really rather just have my normal tooth functionality and no pain. 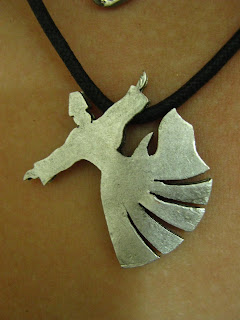 Tonight, as I was riding the bus alone to the Forum Mall in Mersin, (the only mall here, with "malling" being the only activity to really practice in ones spare time, besides laying on the beach and reading books on the balcony), I found myself thinking a lot about fate, and life, and all those deep meaningful personal things that paradoxically you somehow can only focus on in a crowded bus, surrounded by others, with your headphones stuck in your ears.

How did I end up here exactly? Living and working and doing everyday things like going shopping for clothes and herbal toothpaste, on the coast of Turkey? It feels so natural and I feel so at home amongst the minarets and Kebab shops, even though I don't understand the chatter of voices on the bus, the long words and quick Turkish consonants; even though i still have to remind myself that here "C's" are actually "J's"; even though unfortunately no one drinks coffee at breakfast and for some reason prefers tiny cups of tea, even though today is July 1st and Canada day and my actual home is thousand of miles (but it might as well be light years), away.

I remember when I visited Turkey last fall, and when the day came to leave, I had to literally peel myself off the seat at Serkiki station in Istanbul, because i didnt want to board the train that night to Romania. I remember looking at the lights of the Bosphorous and feeling sad to be leaving and just how badly I wanted to stay and wander and inhale the spicy smells of apple tea and sheesha, drink fresh pomagranate juice every morning and sit on the walls around old Sultanhemet, consume and contribute somehow to the strange ineffable magic that draws me to Turkey. I also remember promising to myself that one day I would be back, somehow, some way...and here, now less than a year later I find myself living and working in Turkey.

And so on the bus today I asked myself...how did this happen? It's just all so crazy. Everything. This entire trip, I mean. It might sound ridiculous but....I visited the VALLEY OF THE KINGS for godsakes. The resting place of the motherfreaking PHARAOHS!! And sure, thousands of tourists have made that trip before me, thousands of chino- wearing, obscenely-large-camera toting, pasty white North Americans but for me it meant so much more than seeing a tourist destination. For me it felt like the cumulative effect of a life spent in daydreams of far off places, when I honestly never thought i'd have the money to go anywhere far away and here I am, actually doing it! And as much as i'd like to take the credit for my life, and it unfolding in as awesome a way as it has....i just sometimes feel like i have nothing to do with it, like being the central character in a movie that i am not directing, but who is allowed some improvisational spontaneity here and there.

I honestly feel like I am meant to be here in Turkey, even if i don't know why exactly. Today as I watched the sun set from the windows of that bus, it all made sense for just a second, and I felt okay with the fact that my bank account is running dangerously low, with the concept that I don't know exactly what I will do when my job finishes, or where I will get my stupid miserable tooth fixed. I felt okay with the prospect of just...not knowing or having any control over what is yet to come.

I surrender to fate, yet will still keep up my efforts to live a life I am happy with, visiting Pharaoh's graves, Ancient Nabataean temples and every goddamn crowded souk and Bazaar I can find, along the way.

I want to make sure that it is the fate I choose that unfolds.

And that might not make sense to virtually anyone on this planet, except a long dead dervish wanderer...but that's okay with me.
No comments: