smokin' sheesha while waiting for my laundry, while a man saws and welds steel 3 feet from me at ear-shattering decibel levels. 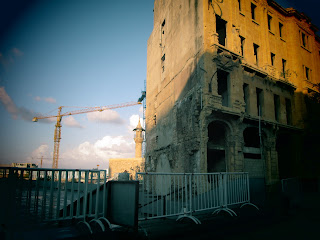 So, today I ventured, (wobbly jello-foot and all), out of my hostel in the Gemmayzeh district, towards downtown Beirut, with the hopes of hanging out near the waterfront in some sheesha bar and whiling away the day, writing. It didnt quite go as planned, as even crossing the road in Beirut is a challenge, and I immediately had flashbacks to being in Cairo (though it wasnt quite that chaotic). My first thought was that it felt like walking in a post-war zone (like when I was in Erbil in Iraq and you couldn't walk down the street without dodging a dangling electrical wire), and then I realized that that is indeed what Beirut is - even if the war officially ended here some 2 decades ago and people are looking forward, not back. Its a city trying to rebuild itself, and while it seems to be doing a great job, and the people here are lovely...it felt pretty ugly, and certainly not picturesque like Marrakech or Damascus or Aleppo (the Syria I knew before the horrifying current civil war there, that is).

After a half hour or so of walking in what vaguely felt like the direction of the sea, nearly being hit by many a 'servicee' taxi, and almost re-spraining my ankle on the potholed, crumbling streets, I ended up in the fancy-pants shopping district- Juicy Couture, Chanel, Armani boutiques abounded. It sort of gave the feeling of what I imagine Dubai to be like (not at all my style), yet with the disheveled, disorganized feel of a post-war zone. Bizarre. Women in teetering highheels and fancy cars all around streets with no sidewalks, and bombed out ruins of buildings. The plus to this is a lack of harassment (ala Cairo), as the Lebanese appear to want to be seen as vaguely European and stylish (Beirut having being dubbed the "Paris of the MiddleEast" many years ago seems fitting), but at the same time, the type of market souks and cheapo-shops that I so enjoy about other Arabic countries is sadly missing. I also have my own issue with that sort of attitude - putting on fancy feathers and dressing in exhorbitantly priced outfits, while the outlying slums of Beirut, and Palestinian refugee camps are a world apart. (But that's another socialist rant for another time).

Anyways, now I am back at my hostel, about to eat a plate of delicious Kibbeh (football shaped bulgar wheat and beef meatballs in a yogurt-y soup) -should it ever actually arrive from the kitchen, that is. Every single day my food seems to go missing, and I am lost as to why- if I just havent been aggressive enough in my ordering, or if i've said some offensive word in Arabic, by mistake. Besides this small minor detail however, and awkwardly waiting forever until finally I have to go to the kitchen to see what the hell happened to it...my hostel seems very much like a welcoming sanctuary amidst the broken buildings and busy streets and I am grateful for it. And the food here is AMAZING. 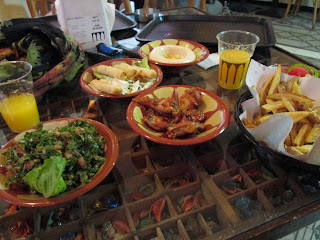 Well well....I haven't written anything on here in almost a year. How the time flies! My last posts were written in Morocco, which seems like a very long time ago, and yet also simultaneously like yesterday. Weird. My nocturnally nomadic life is back in full swing, once again, after an 8 month return stay in my hometown of Calgary.

Now I am currently in Beirut visiting friends for a week, before I embark on a month long exploration of Ethiopia.  I haven't got a chance to do much here yet, as on my first night I somehow managed to (drunkenly) sprain my ankle, after enjoying with a bit too much vigor, all-you-can-drink rum and orange fanta's, at a underground Gay bar (a fun night otherwise). I just ate a giant plate of fresh Tabbouleh and hummus here at my hostel/cafe/Arabic school, and the familiar soothing smell of sheesha is my constant companion. Life is good -minus the hideous swollen foot.

It took a few days to settle into the whole living out of a backpack lifestyle, but now its starting to feel like home, the constant flights and washing my underwear in a sink, hanging it off windowpanes and bunkbed bars to dry. Its weird and wonderful to be back in the Middleeast, so close to my beloved Syria, yet unable to visit there. Still, Beirut has a lot going for it - great food, tons of bars, hilarious fun people...its just a bit expensive compared to Damascus!

Thankfully Ethiopia is rumoured to be one of the best places for budget backpackers, and Im hoping that recent inflation and a burgeoning economy (good things mindyou), havent effected the cost of living tooooo much. Sub-saharan Africa! Ancient Christian monasteries! Hyena feedings! Baboons! I can't wait.